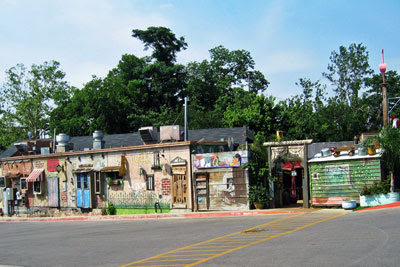 Last year I was on a business trip to Long Beach, CA and decided to eat at a restaurant featured on the Food Network show, Diners, Drive-Ins and Dives. The food was great. Last week I took a business trip to Austin, TX and did the same thing, with similar results.
Saturday morning I got up and decided to take a drive into downtown Austin and see if I would take a few interesting photos of the area. I only had an ancient point & shoot digital camera from the office, so the photos aren't as nice as I was hoping for. Any way, back to the food. This place is called Maria's Taco Xpress and it definitely qualifies as a dive! It has more character and flavor than Juan Valdez. You enter the place through a dirt/gravel courtyard that is the outdoor dining area and probably where a blues band plays on Friday night. You walk up to the counter, place and pay for your order and in a few minutes a truly unique dining experience is delivered to you. I did not get a photo of the two tacos that I ordered and I cannot begin to describe what was on them, only that they were wonderful. They were like no other soft tacos I have ever had. So, if you're in Austin, look up Maria's Taco Xpress. It's on Lamar Ave. about two miles west of the river and downtown. You won't be disappointed.
Posted by DrillerAA09 at 6:40 PM