Memorial Day, Honor Those Who Gave Their All 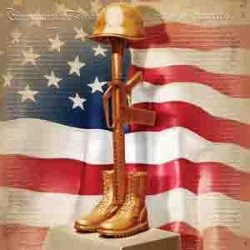 Thank A Veteran For Your Freedom
By J. L. Sager
It was a veteran, not a reporter,
Who guaranteed freedom of the press.

It was a veteran, not a poet,
Who guaranteed freedom of speech.

It was a veteran, not a campus organizer,
Who guaranteed freedom to demonstrate.

It was a veteran, not a minister,
Who guaranteed freedom to worship.

It was a veteran, not a salesman,
Who guaranteed freedom to own property.

It was a veteran, not a travel agent,
Who guaranteed freedom to travel.

It was a veteran, not a politician,
Who guaranteed freedom to vote.

It is a veteran who salutes the Flag,
Risks it all for the Flag,
And who is buried beneath the Flag. 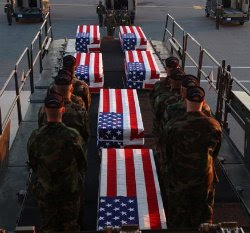 Memorial Day, originally called Decoration Day, is a day of remembrance for those who have died in our nation's service. There are many stories as to its actual beginnings, with over two dozen cities and towns laying claim to being the birthplace of Memorial Day. There is also evidence that organized women's groups in the South were decorating graves before the end of the Civil War: a hymn published in 1867, "Kneel Where Our Loves are Sleeping" by Nella L. Sweet carried the dedication "To The Ladies of the South who are Decorating the Graves of the Confederate Dead" (Source: Duke University's Historic American Sheet Music, 1850-1920). While Waterloo N.Y. was officially declared the birthplace of Memorial Day by President Lyndon Johnson in May 1966, it's difficult to prove conclusively the origins of the day. It is more likely that it had many separate beginnings; each of those towns and every planned or spontaneous gathering of people to honor the war dead in the 1860's tapped into the general human need to honor our dead, each contributed honorably to the growing movement that culminated in Gen Logan giving his official proclamation in 1868. It is not important who was the very first, what is important is that Memorial Day was established. Memorial Day is not about division. It is about reconciliation; it is about coming together to honor those who gave their all.
Memorial Day was officially proclaimed on 5 May 1868 by General John Logan, national commander of the Grand Army of the Republic, in his General Order No. 11, and was first observed on 30 May 1868, when flowers were placed on the graves of Union and Confederate soldiers at Arlington National Cemetery. The first state to officially recognize the holiday was New York in 1873. By 1890 it was recognized by all of the northern states. The South refused to acknowledge the day, honoring their dead on separate days until after World War I (when the holiday changed from honoring just those who died fighting in the Civil War to honoring Americans who died fighting in any war). It is now celebrated in almost every State on the last Monday in May (passed by Congress with the National Holiday Act of 1971 (P.L. 90 - 363) to ensure a three day weekend for Federal holidays), though several southern states have an additional separate day for honoring the Confederate war dead: January 19 in Texas, April 26 in Alabama, Florida, Georgia, and Mississippi; May 10 in South Carolina; and June 3 (Jefferson Davis' birthday) in Louisiana and Tennessee.
The story of Memorial Day begins in the summer of 1865, when a prominent local druggist, Henry C. Welles, mentioned to some of his friends at a social gathering that while praising the living veterans of the Civil War it would be well to remember the patriotic dead by placing flowers on their graves. Nothing resulted from this suggestion until he advanced the idea again the following spring to General John B. Murray. Murray, a civil war hero and intensely patriotic, supported the idea wholeheartedly and marshalled veterans' support. Plans were developed for a more complete celebration by a local citizens' committee headed by Welles and Murray.
On May 5, 1866, the Village was decorated with flags at half mast, draped with evergreens and mourning black. Veterans, civic societies and residents, led by General Murray, marched to the strains of martial music to the three village cemeteries. There impressive ceremonies were held and soldiers' graves decorated. One year later, on May 5, 1867, the ceremonies were repeated. In 1868, Waterloo joined with other communities in holding their observance on May 30th, in accordance with General Logan's orders. It has been held annually ever since.