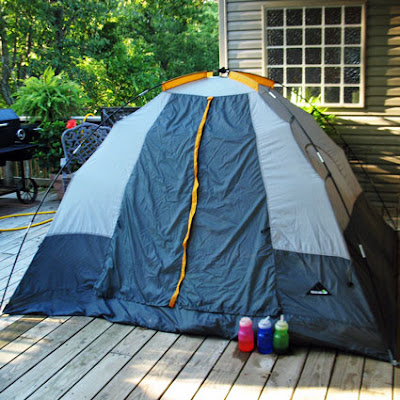 Wednesday evening the three younger grandcrew came home with my bride, Nana, to spend a couple of nights with us. Nana thought it would be fun for them to camp out on the back deck. We have an 8'x8' dome tent that we used many moons ago. I set it up, Nana blew up an air mattress of herself and made pallets for the grandcrew.
There are woods right behind our house so that the night air was filled with the sounds of crickets and other critters. They popped two big bowls of popcorn, sliced several apples, got their drinks and headed out the back door, Nana leading the way. Of course everyone had to have a flashlight for the "scary story" time later in the evening. Each of the two granddaughters read a book by flash light. Nana read a book that the grandson had picked out. I left the festivities around 9:30, since there was not enough room in the tent for everyone and I was the only one with a day job. As best I can tell, the party continued until after midnight. Apparently there was a second raid on the kitchen for more snacks. The temperature fell to around 55 degrees that night, which is PERFECT for sleeping in a tent! Thursday morning they got up, came into the kitchen and helped Nana fix breakfast. Breakfast at Nana's house ALWAYS includes bacon, sausage, eggs, biscuits, gravy,and jelly. That's the rule. They had so much fun that they decided to spend the next night in the tent as well. The second party lasted a little past 10:00 p.m. Friday morning, breakfast repeated itself. I got off work early Friday afternoon and we all went to see G-Force 3D. It is a great movie. I actually liked it better than Ice Age III. The movie was over around 6:30. We dropped them off at their house and headed home. Man, was it ever quiet with the grandcrew gone!!! Next time they want to camp out for real. I believe that's going to mean renting a pop-up and heading to the river or lake. Memories are made of this. Life is good! 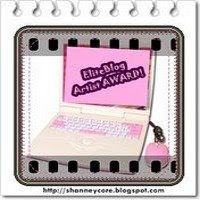 On a side note. I qualified for this award over at Sandee's Comedy Plus. I probably should have saved it for a more "artsy" occasion, like the cloud photos in the previous post.
Posted by DrillerAA09 at 8:53 PM