Here, one of her team mates is in the clear and headed toward the goal. In this match it was rare to see a break away like this. It's even more rare to get an uncluttered background for the photo.

Another team mate lines up a pass. The defender, in white is a little late to the action.

The helpless look on the goalie's face as the ball flies into the net and a score for the team in black, which happens to be the team I'm rooting for. 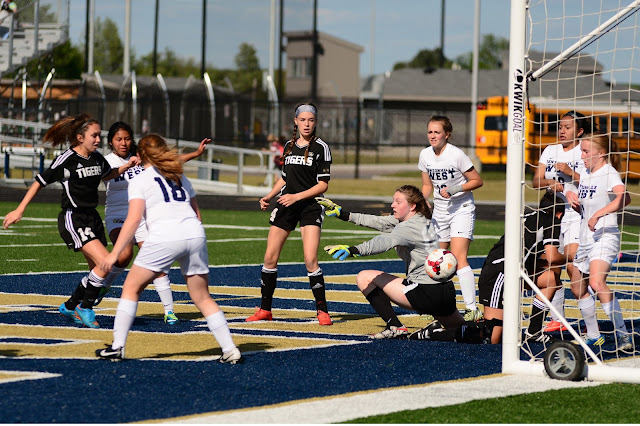 On this day there was a lot of action around the opponents net. The youngest grand daughter is the one in the middle of the image, watching another shot slide past the goal keeper and into the back of the net. Goalies have a thankless job and some days things just don't go very well.

The reason for that smile in the first photo is that the youngest grand daughter scored two goals in this match. Here she is scoring her second goal of the match and her final one of the season. It's always good to end the season on a high note. Looking forward to her sophomore season.
Posted by DrillerAA09 at 1:00 AM