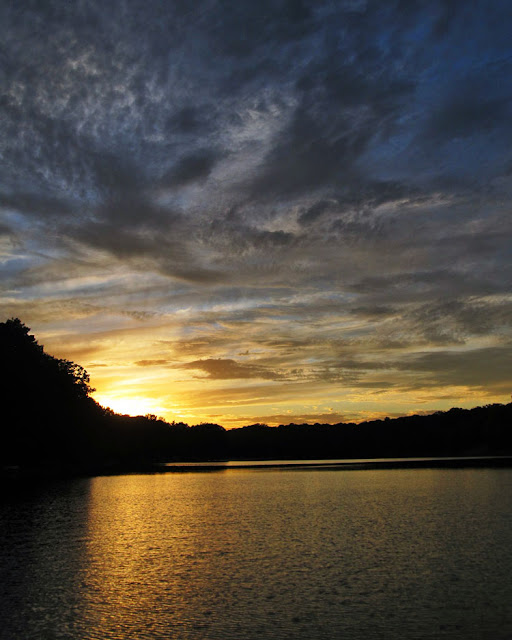 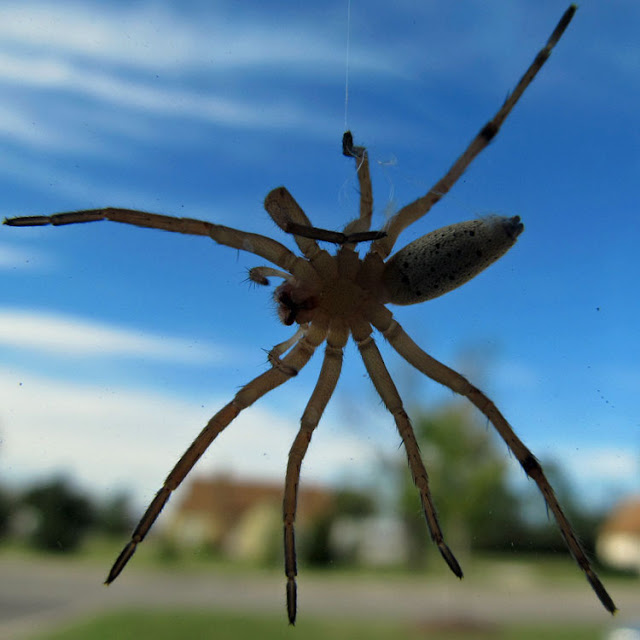 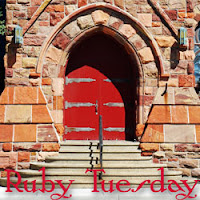 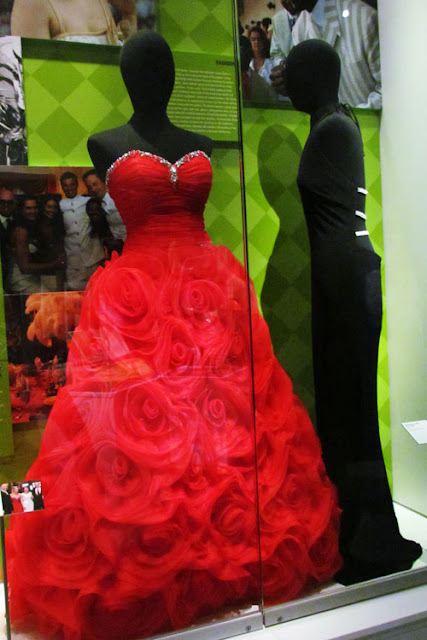 This ruby red gown is on display at the Churchill Downs museum.  I didn't read the whole story behind it, but the dress is associated with one of the parties that are held around town, in connection with the Kentucky Derby.  And yes, it does look like large rose blossoms, after all, the Derby is the Run for The Roses.

On another note, is it just me or are the retailers rushing Christmas this year?  Lowe's and Walmart already have their artificial trees, lights and exterior displays for sale.  I don't expect the start of the Christmas season to be limited to the day after Thanksgiving any more, but some people haven't finished their back to school shopping yet and Santa is already in the garden center.
Happy Ruby Tuesday all. 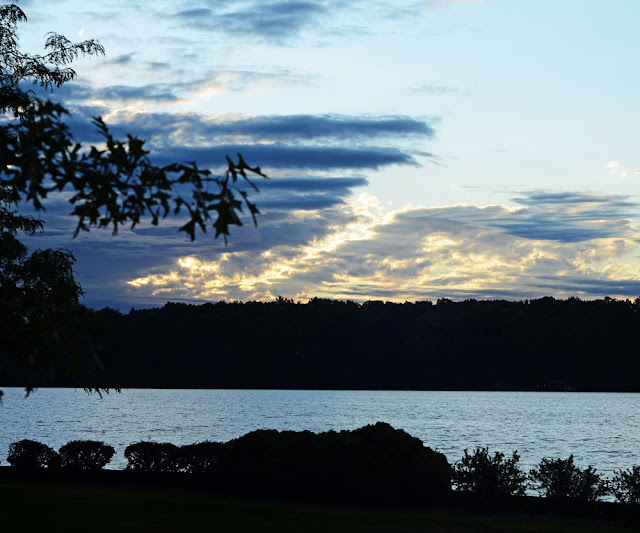 While on vacation last week, I got a phone call informing me that my aunt had passed away.  She was my last living aunt and the one most like a big sister to me.  Our families took vacations together, so my cousins are more like younger siblings than cousins.  We were in Louisville, KY when the news came, so we left on Friday to drive to Decatur, IL for the memorial service.  One of my cousins lives on Lake Decatur and this was the sunrise the morning of the memorial service.
Death serves as a reminder to the living that our days are numbered and that life is fleeting.  We have a responsibility to live each day as if it were our last.  Our life should make the world around us a better place.  The world around my aunt was a better place because of her presence.
My inspirational song this week comes from Chris Tomlin.  While death is a reminder of our mortality, Christ is a reminder that life everlasting belongs to the redeemed, and that death is merely the portal through which we must pass.  There will come a day when all of us will be called to pass from this world.  Having invited Christ into my heart and accepting Him as my Lord and Savior, I know that the instant that I leave this world, I will rise again in the presence of my Lord.  Enjoy. 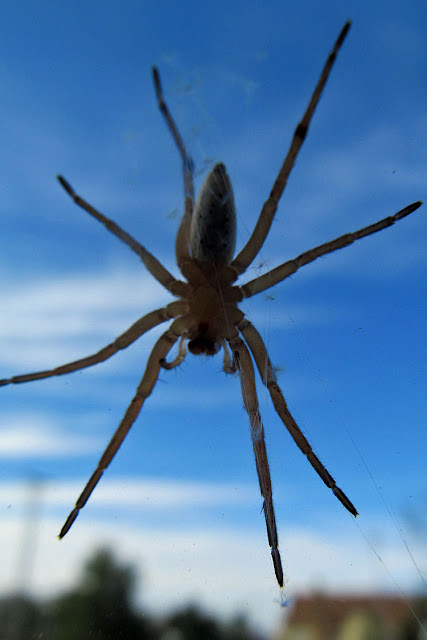 My tribute to the National Quartet Convention would not be complete without some music from the most popular group in Gospel Music today, the Gaither Vocal Band. The Gaithers have been around since the late '50's. The group started as the Gaither Trio, featuring Bill Gaither, his wife Gloria, and his Brother Danny. Over the years the group transitioned into the Gaither Vocal Band and has featured some of the finest voices ever to grace the gospel stage. The current edition is no different. Bill still heads the group and sings the bass line. Mark Lowery provides some comic relief and sings the baritone harmony. Then there are the tenors, Michael English, Wes Hampton, and David Phelps. It just doesn't get any better than this. Enjoy.

The celebration continues.  My wife and I are at the National Quartet Convention in Louisville, KY, so this week I am posting videos of groups that will be performing while we are there.  Today I'm featuring a more traditional gospel quartet, The Dove Brothers.  They've been around quite awhile, and they have a sound that most people would recognize and a country gospel mix.  Enjoy.

Today I'm going to feature a relative new artist.  The Crabb Family has been around Gospel Music forever.  Several years ago there was a changing of the guard, as the younger generation took the reins while the older folks began to retire.  Some of that younger generation have moved on to solo careers.  One of them is Jason Crabb.  He will be performing a couple of times at the National Quartet Convention. Here is his latest.  Enjoy.

Day three of my National Quartet Convention concert brings another family group to your monitor, The Isaacs.  They have a definite bluegrass flavor, but it is a sweet, sweet sound.  Enjoy.

This next song was preformed at the National Quartet Convention last year.
Posted by DrillerAA09 at 10:30 PM 1 comment:

For day two of my National Quartet Convention celebration, I bring you Kim Collingsworth.  She is perhaps the premiere Southern Gospel pianist working today.  I could listen to this for a long, long time.

And if that's not enough, she can sing too. Enjoy.

This week my wife and I are attending the National Quartet Convention in Louisville, KY.  The very best in Southern Gospel music will be there and the music will almost non stop for a week.  I honor of the occasion I will be posting videos each day that represent the groups that we will be seeing.  First up is one of my very favorite groups, Ernie Haas and Signature Sound.  Ernie is the lead tenor.  His father-in-law was the late George Younce, arguably the best bass ever to sing Gospel music and he founded arguably the best quartet in the history of the genre, The Cathedrals.  Here is Signature sound paying tribute to The Cathedrals with "Boundless Love".

Skywatch Friday, A Tribute To 9/11 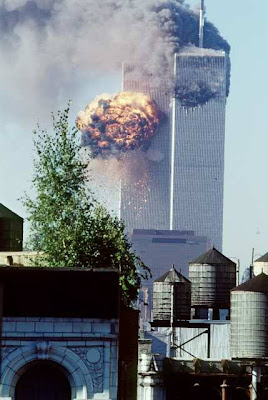 Usually Skywatch Friday is filled with images of beautiful skies.  There are sunrises and sunsets posted that nearly take your breath away.  There was a day when the clear blue sky was filled with fire, smoke and death.  The country was filled with unbelief, sorrow, and unimaginable pain.
Do you remember where you were when you got the news. I was in a board meeting when some one came in and announced that a plane had crashed into the World Trade Center. Like most, we thought, what a terrible accident. When news came of the second plane hitting the second tower, and there was no doubt that it was a terrorist attack, work virtually came to a halt as staff were glued to their radios to find out more about what was going on. No one ever expected this kind of murderous act to be carried out on our soil. But, in one horrible day, we found ourselves fully engaged in the war on terrorism. I think we now know how our parents felt when the news of Pearl Harbor reached their ears. We were horrified, stunned, and angered, all at once. My heart still breaks for those who lost loved ones on that day, especially those who never found any sign of their loved one, to give them closure. Many lives just vanished. That would be almost too painful to bear. But the spirit that resides in those left behind has been most admirable. and, on Sunday, 9/11/11 they will have a memorial to visit and honor those who were taken from them. Often times music speaks to me better than mere words and this is one of those times. Few say it any better than Gloria Gaither and the Gaither Vocal Band. May those who suffered loss on that day find closure and a measure of peace in this memorial.