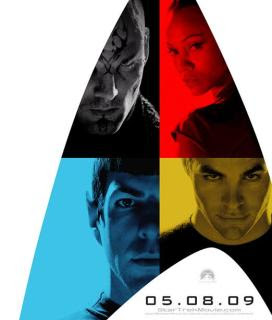 Every Tuesday evening my bride meets five of her friends from church for some informal fellowship. They may have dinner, go to a movie, watch American Idol or whatever. This past Tuesday evening the ladies convened at our house. That means I have to find something else to do. So, I went to the movies. I couldn't decide between "Angels and Demons", "Terminator, Salvation", or "Star Trek". I called my Son-In-Law, who loves the movies and has probably seen all of the above. Without hesitating, he said "Star Trek".
Now please understand, I grew up with the original TV series. I loved the show, but I was never a "Trekie". I don't have a federation uniform hidden in the closet. I can't quote dialog from specific episodes, and I don't know the back stories of the main characters. Come to think of it, I don't believe I've seen any of the previous Star Trek or Second Generation movies.
Well ladies and gentlemen, let me recommend this one to you. I know, I'm about six weeks too late, but this is a good movie. You learn how the main characters met at the Federation Academy. You learn why Spock does indeed have some feelings. There is great action, a very good story and amazing computer graphics. It goes without saying that this movie has set the stage for a whole new series with these actors. In fact, it is my understanding that, like Lord of the Rings, the producers actually filmed three episodes at once. Looks like we will be going where no one has gone before for quite some time to come. And yes, the original Spock (Leonard Nimoy) had a cameo role in this film. What can I say..."Live long and prosper".
Posted by DrillerAA09 at 8:32 PM