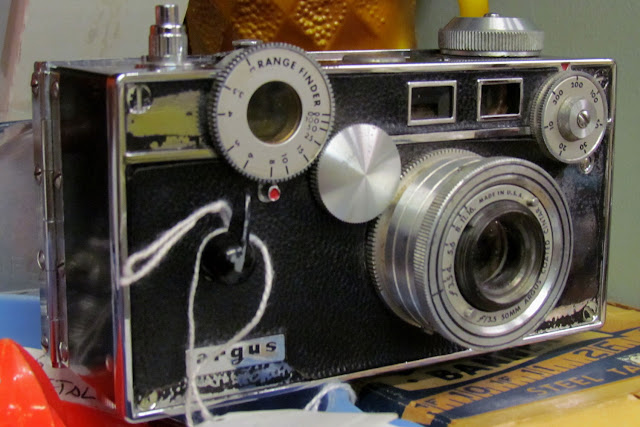 Inspiration comes from a multitude of sources.  I suppose it all depends on what you want to be inspired to do.  I saw this camera in a flea market booth a few weeks ago and it reminded me of my first inspiration to pursue photography.  In 1965 I was a freshman at Oklahoma State University and one of my room mates was taking a photography class.  There was a sports car rally event being held on the parking lot of the football stadium and he was going to take some photographs, so I tagged along because I liked cars. The camera he was using was an Argus C3, like the one above.  He took one roll of film and then he handed the camera to me and I shot a roll of film.  The photos were black and white.  I was inspired on two levels.  I was hooked on photography and sports cars. A couple of years later I bought my first 35mm camera, a Minolta SRT101 and in 1972 I bought my first and only sports car, a '71 Datsun 240Z.
I used that Minolta for over 20 years. When it finally ceased to function properly and could not be repaired, I bought a Nikon N50 and I have used Nikon cameras ever since. Later, the introduction of digital photography inspired me, because I was no longer limited to 36 exposures per roll, and someone else doing all of the processing. My first digital SLR was a Nikon D80 and I used PhotoShop Elements 3 to do the post processing.  I am now shooting with a Nikon D7100, using PhotoShop Elements 13 and will most likely upgrade to version 14 soon. The camera may well suit my needs for another 20 years. I retired two and a half years ago and that is when I really began to get more involved in photography.  If you wander around in this site you will see some of my serious and not so serious work. Evey time I take my camera out and use it I learn something new about photography and I learn that I still have not scratched the surface of the things that I can explore through my lenses. And it all started with an Argus C3 fifty years ago.  What has inspired you? Have a blessed week-end.