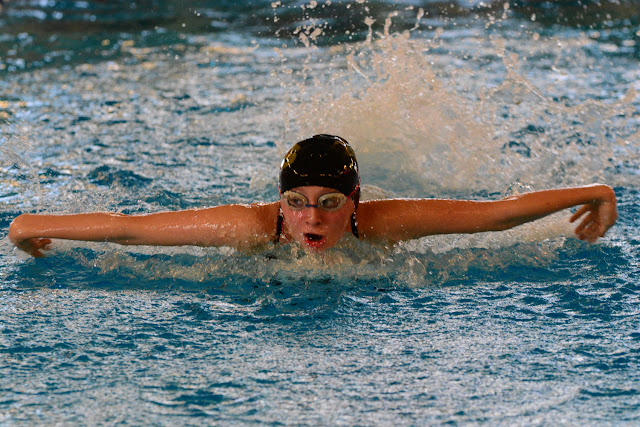 Tuesday I spent much of the afternoon at the Community Center pool watching the high school district diving competition. I had a great time and you can scroll down to see what I captured. Yesterday I spent much of the afternoon back at the pool watching the swim competition. Above is one example of what I captured. While the swimmer is putting all of her effort into the competition, she is also glancing to the side to check and see where the competition is.
Often, in the race of life we spend too much time checking on the competition and not enough time giving our best effort to win the race. Toward the end of his life, the apostle Paul reflected on his life race and said, "For I am already being poured out as a drink offering, and the time of my departure is at hand. I have fought the good fight. I have finished the race. I have kept the faith." (2 Timothy 4:6-7). Paul kept his spiritual eye on the finish line, meeting his Savior in heaven. He knew where his adversary was at all times, and he didn't have to check to see were the evil one was. Paul knew that the race had been won when he accepted Christ as his Savior on the road to Damascus. He knew that as long as he focused his attention on Christ, Satan would always be behind him and never in control of him. The day that Paul stepped into eternity, he stepped into the waiting arms of the Savior. The race was won, not because of what Paul did, but because of who Jesus was. Have a blessed day.

Labels: Casting Crowns, Inspiration Thursday, Who Am I