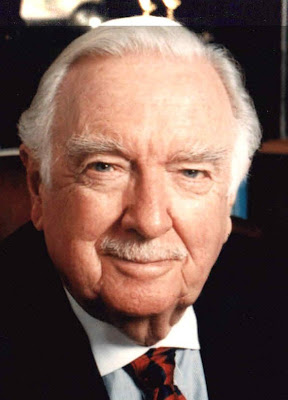 Of all of the celebrities that we have lost recently, Walter Cronkite will be the one that I miss the most. As a child of the 60's, I grew up with the voice of Walter Cronkite giving me the account of history making events. He covered the early political conventions. He told me that JFK had been killed. He told me that we had walked on the moon. As a young adult Walter Cronkite came into my living room every evening and told me about the events of the day.
He was a professional in every sense of the word. Those who knew him, called him the definition of an anchorman. There was something very soothing and comforting about that deep, resonating voice that helped us get through even the most difficult news events. There was something in his personality that told you, you could trust him. You could believe him. He would discover the truth and tell it to you without jumping on a soap box and making a major event out of something that didn't deserve to be a major event. He covered history with the honor and respect that history deserved. Walter Cronkite let the news be the star and not his personality. I think that's because he was a newspaper man first, and it was always his first love. In fact, it is said, that the word "anchorman" was coined as a result of his coverage of the 1952 presidential conventions. His signature line, "That's the way it is" ended every broadcast. Where did that come from. I'll let Walter tell you.