It's been a tough sports week at our house.  First, my alma mater, The University of Oklahoma Sooners got beat by the Missouri Tigers last Saturday.  The Sooners were ranked No. 1 in the BCS prior to the game.  On Sunday, my NFL team of choice, the Dallas Cowboys lost for the fifth time in six games!  Then, after beating the Yankees in the ALCS, the Texas Rangers promptly lose the first two games of the World Series.  Is anything going to go right?  YES IT IS!!! 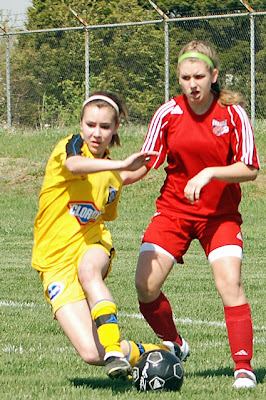 Friday afternoon, the young lady in yellow, our oldest grand daughter, made the high school varsity soccer team as a fourteen year old freshman!  Wooooo Hoooo!!!!  Life is good.  This team has won the 7A state soccer championship four of the last five years and making the team as a freshman is a HUGE deal.  Scooter has been playing the game since she was six.  Her primary assets are speed and a left footed shot.  She's gonna kill me for calling her Scooter, but that's a story for another day.  At any rate we are so proud of her.  I promised her that if she made the team as a freshman, I would buy her the soccer shoes of her choice.  Believe me, it will be worth every penny because of the joy on her face when she got the news.  She's been smiling all afternoon.  Right now she is headed to Kansas City, MO to play as a guest on another team this week-end.  Congratulations young lady on a job well done.