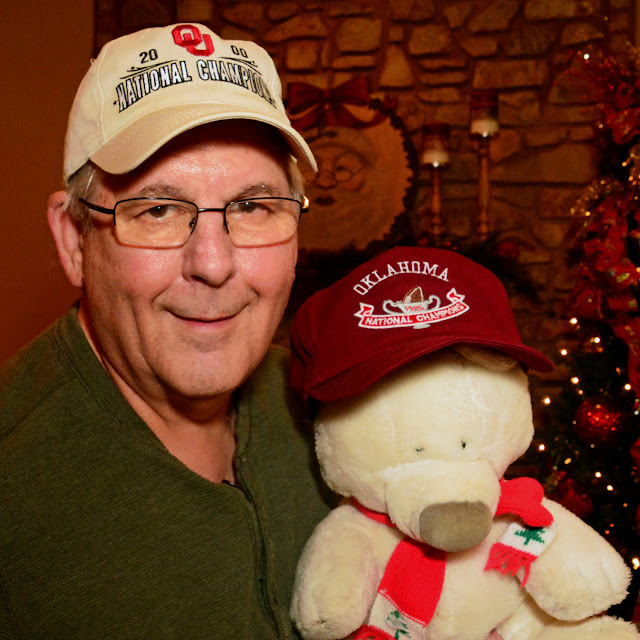 BOOMER!
The regular college football season has come to a close and the four teams have been chosen to play for the National Championship. My Alma Mater, The University of Oklahoma is one of those teams. As you can see, my buddy, Boomer, and I have two championship hats and we're looking for number three. Let me tell you a little about Boomer.
In 1984 I lost my job in architecture to a declining local economy in my hometown of Tulsa. I found work in Dallas several weeks later. My relocation meant that I would be separated from my family for several months. Our daughter was in school and we determined that the family would stay in Tulsa until school was out and I would get an apartment in Dallas until they could join me. Well, my wife and daughter decided that I needed a buddy, but a real live pet was not possible so they found Boomer. Boomer has aged much more gracefully than me. He looks pretty good for 31 don't you think? He now makes an appearance every Christmas, kind of like "Elf on a Shelf" without the antics. Well, Boomer and I are anxiously awaiting the play-offs and are hoping to add another cap to our collection. Think about it. Oklahoma won the National title in 1985 and 2000. It's 2015, so it's our turn, right?  BOOMER Sooner!!!
Regardless of how the play-offs turn out, I know that as long as I have Christ as my Lord and Savior, All Is Well.